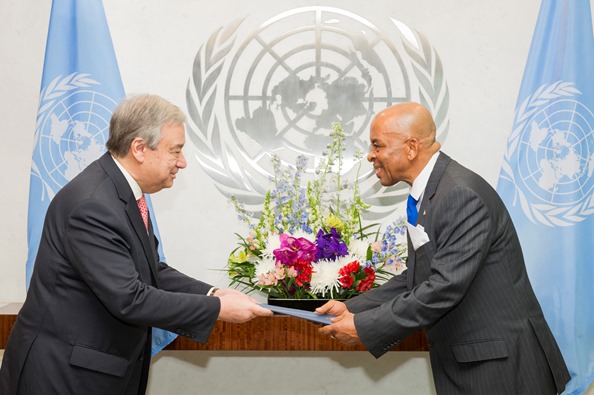 In presenting his Letters of Credence to Secretary General Guterres, His Excellency Cosmos Richardson stated his intention to work closely with the UN Secretariat, its various agencies, and its membership.  He also pledged to advance the organization’s goals, while ensuring that Saint Lucia’s interests are protected and promoted.

Further, Ambassador Richardson used his discussion with Secretary-General Guterres to highlight a few of the issues that most concern Saint Lucia, and the priorities of its people within the United Nations context. Chief among them are climate change, security, the successful implementation of the sustainable development goals, international development cooperation, youth development and unemployment.

Ambassador Richardson also struck a note of national pride, reiterating that his official accreditation to the United Nations occurred on the very day that Saint Lucians at home and abroad were commemorating the island’s thirty-eighth year of independence.

A graduate of St Mary’s College and the University of the West Indies, Ambassador Richardson holds a master’s and a bachelor’s degree in Economics, as well as a post-graduate diploma in Agricultural and Natural Resource Economics.

Ambassador Richardson succeeds Menissa Rambally, who served as Saint Lucia’s Permanent Representative to the UN from May 2012 to December 2016.