The Government of Saint Lucia and the Republic of Bulgaria have formally established diplomatic relations between the two countries. The Joint Communiqué establishing relations was signed on November 05, 2020, in New York by the respective Ambassadors and Permanent Representative of the two countries to the United Nations, His Excellency Cosmos Richardson of Saint Lucia, and His Excellency Georgi Panayotov of Bulgaria. With the signing of this joint communiqué, Saint Lucia now has diplomatic relations with every individual member state of the European Union. 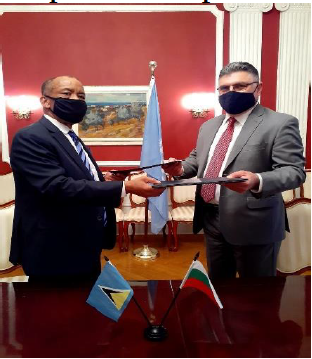 During the ceremony, the two Ambassadors exchanged ideas on ways in which relations between the countries might be strengthened. Ambassador Richardson observed that while the countries had not formally established diplomatic relations before now, as a member of the European Union which is Saint Lucia’s most significant development partner, Bulgaria has been a strategic ally. He, therefore, welcomed the formalization of relations at a time when small states like Saint Lucia are grappling with difficult development challenges such as the COVID-19 pandemic, high debt burdens, and ensuring the maintenance of livelihoods.

Common interests were identified including confronting the global health crisis brought about by COVID-19, combatting the issue of climate change, and attaining sustainable development goals for the benefit of their citizens. Also discussed were the peculiar challenges facing Small Island Developing States (SIDS), and the need for adjustments to be made to the international financial architecture to meet the specific requirements of this group of countries. The Ambassadors pledged to work closely to advance multilateralism in an increasingly complex world. The Government of Saint Lucia welcomes the establishment of relations with Bulgaria; a step which is consistent with its objective to expand its diplomatic reach and build new alliances as Saint Lucia seeks to promote its interests and accelerate its economic and social development.